Want to try an antiperspirant but with sensitive skin?

Tired of doing high-fives that aren’t even high?
An executive who’s uncomfortable on presentations and meetings because of dripping, well.. underarms?
Can’t raise a hand to say your point?
Been partying without those funky hand moves?

WHAT IS MAXIM SENSITIVE ANTIPERSPIRANT

Maxim Sensitive is an antiperspirant (same as Maxim Original) but made for those with sensitive skin. It was made for people who had long been burdened by underarm sweating and has been prevented to live life to the fullest, like high-fives. It is also for people who just don’t want to ruin special moments just because of dripped clothes.

Maxim has been developed specifically for excessive underarm sweating, also known as hyperhidrosis. The active ingredient in this exclusive antiperspirant is a patent-pending formula used and recommended by leading Dermatologists and Surgeons in the USA on controlling underarm sweating.

Some customers claimed to see the results in a day. Some testified that their body odor was greatly reduced due to less perspiration.

Go and search the internet for thousands of people who have proven the 100% guaranteed effects of Maxim.

ARMPIT USE OF MAXIM SENSITIVE ANTIPERSPIRANT

Maxim is applied at night before bedtime to allow skin absorption. You may then bathe in the morning as usual. Maxim will not rinse off even after being washed, soaped or scrubbed. You may use Maxim everyday up to once a week depending on the desired results.

MAXIM lasts between 2 months to a year (as testified by a lot of our customers).

If you do not have sensitive skin and want to try our strongest variant, you may look into Maxim Original Antiperspirant

There are no reviews yet.

Be the first to review “Maxim Sensitive Antiperspirant” Cancel reply 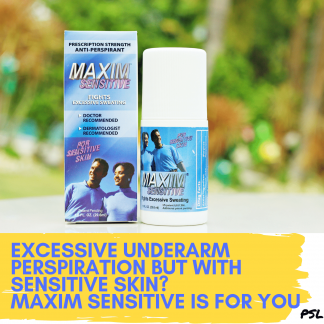